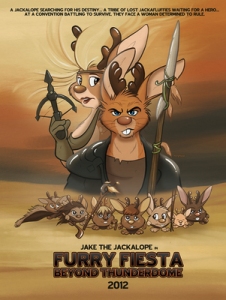 Furry Fiesta 2012 “Beyond Thunderdome” was the first furry convention I ever attended, and “All’s Well that Ends Well” was written for their conbook. Like many fan conventions, Furry Fiesta has mascot characters, and in this case, they are two jackalopes named Jack and April.

I think I did a pretty good job at using the con’s theme in the story, but I was surprised to see the Furry Fiesta conbook cover; the ‘jackafluffy’ characters apparently had little hands and feet, but in my story they are more like Tribbles. Nobody seemed to mind, though.

Life after the Final War wasn’t easy, but folks got along as best they could in the dusty lands that had once been called North Texas. Before the bombs had dropped for the last time, jackalopes had been known as fictional creatures, but thanks to the unpredictable power of the atom, they now roamed the landscape alongside many other new beings and animals. Unlike their kitschy namesakes, they grew to be several feet tall, walked on two legs, could speak, and lived as the humans that had once ruled the planet did.

Jack and April were two jackalopes who lived on a small farm a few miles away from Dallas, which was now a modest city of ten thousand beings. They tended their farm and enjoyed a quiet life that was briefly made less so by the occasional trip to the Dallas market to sell the fruits (and vegetables) of their labor.

Awakened by the shrill crow of a roosterpillar, Jack threw on a set of overalls, picked up a bucket, and walked outside to a rain barrel. As it was the middle of summer, he was not surprised to find it empty.

“Guess ahm a-goin’ to the well…” Jack muttered to no one in particular in his Texan accent. He started leisurely walking towards a barren hill, whistling and swinging the bucket back and forth as he did so. On top of the hill was a brick well that provided water for them during dry spells.

Upon reaching the well, Jack found something odd sitting on its edge: a light brown ball of fluff with antlers and ears sticking out of its top that looked just like his. The antlers and ears slowly rose and fell as if the fluff ball was breathing deeply.

“Whut have we got here?” Jack asked to himself as he set the bucket down on the ground. Unsure of what to make of the fur ball that sat before him, he poked at it with a finger. The ball of fur squeaked, spun around, and Jack soon found himself face-to-face with an angry little…whatever-it-was.

Though Jack didn’t know it, the fur ball was a creature known as a Jackafluffy, another creature borne of the atom’s unpredictability and uncertainty. If there are two things Jackafluffies don’t like, its being woken up early and being poked.

The Jackafluffy began to growl and shake like an angry fuzzy volcano. Before Jack could react, it leapt up at him with incredible speed and smacked him right on the forehead. As Jack reeled from the blow in surprise, the Jackafluffy landed on the ground and quickly leapt at him a second time. It struck him in the chest, and though he was light and the blow didn’t amount to much force, it knocked Jack off balance and sent him tumbling down the hill.

Jack sat at the bottom of the hill, wondering what the hey had just happened. After dusting himself off, he grabbed a nearby broom and sprinted back up the hill, slowing down as he approached the well. He held the broom like a baseball bat, armed and ready to swat the tar out of the ornery fuzz ball.

The Jackafluffy was in the same spot that it had been before and had fallen back to sleep. Once Jack got within range, he stood completely still for a few seconds, waiting to see if the Jackafluffy would notice him. Securing his grip on the broom handle, Jack then swung as hard as he could, the quiet morning briefly broken by the WHOOSH of the broom and a small squeal as the Jackafluffy disappeared into thin air.

“Whut the?” Jack said to himself as he looked around to see where the Jackafluffy had landed. He looked at the end of the broom, where the angry Jackafluffy had been holding onto its bristles. Without warning, it jumped at Jack’s face, bit him on the nose, and then smacked him on the chest, sending him down the side of the hill again.

Jack was fit to be tied. His body was sore, he was covered in dust, grass and twigs, and his nose was now bleeding a little where the Jackafluffy had bitten him.

“That tears it!” he yelled out into the morning air. “April! Git my gun!”

April calmly exited the house, brushing her blonde hair. She was just an inch or two shorter than Jack, with shorter antlers and fur that was almost white, but was just a little bit brown. Like Jack, she had also thrown on a pair of overalls.

April had grown accustomed to her mate’s outbursts over their years together, having learned that the situation was never as dire as Jack seemed to make it. She gave Jack a curious glance as he sat on the ground.

“Just what are yew doing on the ground there, sweetie?” she asked her flustered mate as she leaned over to peek at him. April patiently listened as Jack rambled on about his encounter with the Jackafluffy.

“You didn’t poke at it, didja?” asked April. “You should know they really hate that,” she said as she helped Jack to his feet. April brushed some of the twigs and grass out of the fur on Jack’s back as he tried his best to compose himself.

“I’ll take care of this, hun,” April said as she started walking up the hill.

“But…” Jack started to speak, but he knew that nothing would make April change her mind once it was set, so he let her walk up the hill. He then dashed inside the house to get his shotgun, certain that he would need it soon.

April soon reached the well and found the Jackafluffy sitting on its edge. This time, though, it was awake and in a bit of a huff. It growled at April as she approached, its fur standing on edge. April knew that Jackafluffies weren’t mean critters and that this one had attacked Jack because he had antagonized it.

April began to speak to the Jackafluffy in a motherly voice. “Hey there, sweetie. I’m sorry about Jack, he ain’t such a bad fella,” she said as she extended a hand to pet the Jackafluffy. The Jackafluffy recoiled slightly as she approached, but allowed her to touch it and began to coo and purr as she stroked the fuzz on its head and scratched it behind the ears.

After about a minute of that, April stopped petting the Jackafluffy and started picking up the water bucket, then dropping it in surprise when the jackafluffy spoke.

“Mama,” it said as it looked up at April with big loving eyes.

“MAMAAA!” the Jackafluffy screeched as it leapt up at April’s head with incredible speed…

Jack had found the shotgun easily enough, but the shells had apparently been hidden. He made a mental note to talk to April about that as he walked out of the house. He started inspecting the weapon, not taking notice of April as she walked down the hillside.

“So whut happened to th’ varmint?” Jack asked as April came closer. Jack looked up at his mate and began to snicker as he saw the Jackafluffy nestled in between the antlers on April’s head, soundly sleeping.

“I don’t want to hear a single word out of yew…” growled April.

Being the loving and understanding mate that he was, Jack started to laugh as hard as he could. April grabbed the nearby broom and swatted Jack on the rear with it, making him laugh even more. Awakened by the commotion, the Jackafluffy woke up and spoke again. “DADDY!!”