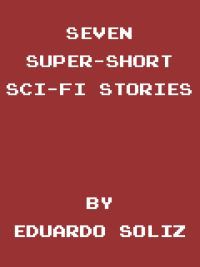 Names for characters can be hard to come by, so I borrow whenever I can. I borrowed a little more than usual for this collection of stories, though. “Henkin” is the last name of a friend whose nickname is in another story.

I wonder if he has a middle name?

All Dr. Henkin wanted to do was look into an alternate dimension, to briefly see into one of those spaces-in-between-spaces that existed in theory.  If his calculations were correct, a device of his own design called the Dimensional Viewer would allow him to do so.  After weeks of assembling, testing and adjusting, the Viewer was ready for its first full test.

Here goes nothing, the doctor thought to himself before flipping a switch on the Viewer’s console.  The lights above briefly dimmed and a humming sound began to reverberate throughout the laboratory as the machine slowly came to life.

A light on the Viewer’s control panel turned from red to yellow to green.  A large screen a few feet to its right turned from grey to completely black.  Content that all was at the ready, Dr. Henkin attempted to ‘tune’ the Viewer to another dimension.  He would make adjustments to the Viewer’s settings, pause to look at the screen to his right, and then try different settings as the screen remained black.

After about fifteen minutes, the doctor let out a weary sigh.  I guess I’ll take some readings and see what’s wrong, he thought to himself.  He took a screwdriver out of his lab coat and used it to remove a few screws that held a metal panel next to the control panel.  He placed the screws and driver into his coat pocket and gingerly lifted the panel up to reveal the inner workings of the Viewer.

The doctor turned around, walked to a lab table and placed the panel on it.  He then found his omnimeter and some paper, then walked back to the open panel to take some readings and write them down before shutting down the Viewer.  He set down the omnimeter, turned it on then pulled a pen from his shirt pocket.  As the pen exited his pocket, it slipped out of his hand and fell toward the exposed electronics of the Viewer.

Dr. Henkin tried to catch the pen, but missed.  The metal pen fell into the machine and impacted the electronics within, producing a bright flash and a loud pop.  The doctor instinctively raised an arm to shield his eyes and stepped away from the machine.

“Great.” The doctor said to himself before letting out another sigh.  He began walking back to the open panel to survey the damage, but before he reached it, he caught a glimpse of the Dimensional Viewer’s screen out of the corner of his eye.  It was now violet.  Mesmerized, Henkin stared at the screen, not sure what to make of what appeared to be an alien sky.

A boy suddenly flew into the lab from the screen wearing a blue and red costume, propelled by jets that came from the bottom of his feet.  Before the doctor could react, a teenaged girl wearing a sailor outfit with lime green accents followed the robot boy into the lab.  A man wearing a navy blue skintight suit with white accents entered next; his head was completely hidden from view by a helmet he wore that was in the shape of a lion’s head.

Realizing that something had gone wrong with the Dimensional Viewer, Doctor Henkin leapt to the control panel to turn it off.  He flipped the power switch but nothing happened.  He quickly mainpulated the machine’s controls in a painc, but the room continued to fill with beings and creatures of all colors, shapes and sizes.  Some spoke to one another while others left the laboratory.  They either flew out of the window or walked, hopped, skipped or rolled out of the door on their feet, paws, and wheels.

Dr. Henkin was at his wits’ end.  He had tried everything that he could think of to shut down the Viewer but the ‘door’ remained open and more beings entered the laboratory.  His presence thus far had been completely ignored by the visitors, so he was surprised when a beautiful red-haired woman wearing a toga drifted over to him.

She placed a comforting hand onto his arm: “Be at peace, young man.  You have opened a door to the sixth dimension, a place where the dreams of the people of your world become reality.  Thanks to you, our world of imagination and your world of reality have become one, and they will never be the same.”

Dr. Henkin took a look around his now-crowded laboratory and took in the chaos that surrounded him.

He looked at the woman, grinned and said: “I think I’m perfectly fine with that.”