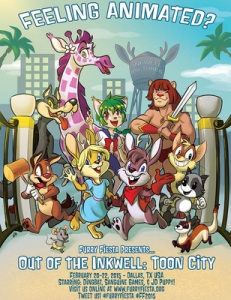 “Status Quo” (which can be found in Con Fluff 1) featured pastiches of a certain smarter-than-the-average-bear and his best friend.  Three years later: this story, written for the Furry Fiesta 2015: Out of the Inkwell conbook, stars a familiar cat and mouse duo, but unlike “Status Quo,” which was set in the world of toons, “Epiphany” is slightly more rooted in reality.

TANG-G-G! The sound of a fire poker hitting the floor with great force reverberated throughout the kitchen. The holder, a white female cat wearing a collar from which a license tag that read “Tammy” dangled, took a step back, her body shaking as the poker vibrated in her right paw. A few feet in front of her, a small grey female mouse stopped running and turned around.

She took a moment to laugh before sticking her tongue out at the housecat with a loud “PBBBT!!”

A moment later, Tammy stopped shaking. She shook her head briefly and angrily growled at the mouse. The mouse gasped and prepared to run away, but Tammy paused for a moment, blinked a few times, set the poker down on the floor and said, “Hold on, Jane.”

The mouse stopped and asked, “What is it, Tammy?”

“What are we doing?” The cat asked, sitting down on the floor.

“We’re doing what cats and mice do,” Jane answered. “I steal food, you try to catch me, and we start all over again.”

Tammy threw her paws up in the air in a gesture of exasperation. “I know, but what are we doing?” She asked again.

Jane was confused; she tilted her head slightly and flatly told the housecat: “I’m not following you.”

Tammy sighed. “I don’t know, it’s just a weird thought that popped in my head. Here’s the thing: Once I catch you, sooner or later another mouse is going to get into the house and I’ll start all over again with that one.”

“Well, yeah,” Jane said, matter-of-factly. “That’s the way it’s always been. Of course, you’d have to actually catch me before that happens.”

The cat let out a ‘humph’ at Jane’s bravado before continuing: “My point is that it’ll never end. We’ll both spend the rest of our lives running around in circles and not really doing anything else.”

“I see,” Jane nodded her head, finally seeing Tammy’s point. “What should we do, then?”

“How about this: You promise to not make any messes or scare my people and you can have food to eat,” Tammy offered. “I’ll even share my food with you!”

The mouse made a disgusted face at the thought. “Ugh!” She retched. “I’ve seen what you eat, no thanks.”

Jane placed a handpaw to her chin and thought for a moment. She smiled, nodded her head and said: “I think I can go along with that…but what happens when your people decide they don’t need a cat anymore?”

“We’ll just have to put on a little show for them,” Tammy said with a wink.

“I like to think so,” a self-satisfied Tammy said. “So…partners?” The cat asked, extending a finger to Jane, who hesitated upon seeing a sharp claw extended from it. “Oopsie! Force of habit.” The cat said with a smile before retracting the claw.

“Partners!” Jane said, enthusiastically shaking the cat’s finger. “This is going to be great!” She exclaimed.

Tammy provided food for Jane, being careful to not take too much lest her people notice things were missing. A few crackers here, a few grapes there and the occasional piece of cheese were enough to keep Jane happily fed. Since Tammy and Jane were no longer spending their waking hours playing ‘cat and mouse,’ the two began to spend their leisure time listening to the radio, reading books or just conversing whenever Tammy’s people weren’t around. Weeks went by, the former enemies eventually became good friends. Indeed, life was very good for them until one fateful day…

“Are you going to be alright?” Jane asked. She stood in the middle of the kitchen growing nervous watching Tammy climb up the shelves of the refrigerator in an attempt to secure some cheese. Tammy had put on some weight; she was no longer spending her days chasing after Jane.

“Oh yeah, I’ll be fine.” Tammy reassured with a grunt as she hung from a shelf. “I’ve done this a thousand times. Ugh!” She grunted and struggled to pull herself up onto a shelf, then sat down to catch her breath for a moment.

“Whew! Almost there, little buddy! Hope you’re hungry!” She said. Jane could only nod her head as Tammy leapt up to the topmost shelf in the refrigerator. Unfortunately, she could not successfully secure her paws on the shelf and reflexively extended her claws in order to grip its edge. She rested her feet on the shelf below. “Uh-oh,” she said as the topmost shelf began to slide outwards. She tried to push herself up but the shelf continued to slowly slide outwards. Her feet lost their grip on the shelf below and her body swung back, pulling the shelf even farther back and dislodging it. Tammy screeched as she and the contents of the refrigerator’s top shelf crashed onto the kitchen floor.

Jane watched in horror as the scene unfolded, then carefully approached her friend, who lay on the floor groaning. Without warning, the sound of the front door opening sounded: Tammy’s people had arrived. Jane bolted for the refrigerator and hid behind it. She waited quietly and listened to Tammy’s people speaking.

“Oh my goodness, what happened here?” A woman exclaimed.

“Looks like Tammy was trying to get into the refrigerator while we were out,” a man said, “I had a feeling something funny had been going on there.”

“Well, that ‘poor dear’ has been eating us out of house and home. Look at how fat she’s gotten!”

“Well, she did get rid of our mice problem.”

“Well, she’s the problem now. Make sure she’s okay then throw her out!”

“No buts, Mary! We didn’t get rid of one pest just to keep another one!”

Jane gasped and began to weep for her friend…a few hours later, it was dusk and the two walked down a city street.

“It wasn’t your fault,” Tammy reassured her, “We’ll find another house and start all over again, I guess.”

“Yeah, but which one?” Jane asked, looking around

Jane stopped and thought for a moment. “How about that one?” She said, pointing to a modest brick home across the street. They walked up to the mailbox and Tammy looked up at its side:

“Stranger things have happened!” Jane replied. The pair walked towards the home. Their destiny was not to make history, but rather, to inspire it.