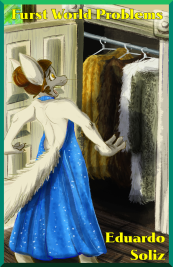 A selection from “Furst World Problems”

There’s always that one guy.

It was a fine Sunday morning and Jesse the bear was walking to his neighborhood grocery store. As was his tradition, he wore the brown-and-white jersey of his favorite team.  He was looking forward to a lazy day of grilling, then sitting in his favorite chair, eating, and watching football.   With a spring in his step and a smile on his face, he strolled in through the front door, pausing to pick up a plastic handbasket after entering.

Nearby, in the produce section, a young bear wearing an orange apron was misting vegetables. He heard the door open and greeted Jesse out of habit.  “Good morning,” he said, cheerfully enough, but upon seeing Jesse, the joy left his voice. “Sir,” he concluded, flatly.

“Morning!”  Jesse said back at him.  The young bear ignored him and resumed his work.  Weird.  Jesse thought while walking to the back of the store to pick out some meat.  He stood in front of one of the coolers and contemplated the various packages in front of him.

“Seriously?” a voice to his left said.

Jesse turned to the source of the comment, an older bear wearing a white shirt and orange tie. “Seriously what?” he asked.

“Get what? What are you talking about?” Jesse asked back, confused.

“Never mind…durn cubs.”  The older bear grumbled before walking away.

What the fuzz…Jesse thought before picking up a package of steaks and resuming his shopping.  He continued to make his way through the store, all the while receiving condescending looks, shaking heads and the occasional ‘humph’ from the other shoppers.

The frustrated bear finished his shopping as quickly as he could and walked to the check-out line.  While he stood there waiting, he looked around the store.  For the first time, he noticed that nearly every other bear in the store was wearing orange colored jerseys with white lettering or orange and white colored clothing. You have got to be kidding me, he thought.  Upon reaching the cashier, he smiled and said hello to the young bear teenager behind the register. In response, she rolled her eyes and let out a small ‘humph’ under her breath.

That was the final straw: Jesse growled, turned around to face the other bears standing in line and yelled: “OKAY, EVERYBODY!  I AM A BEAR AND MY FAVORITE TEAM IS THE HYENAS!  GET OVER IT, PEOPLE!”