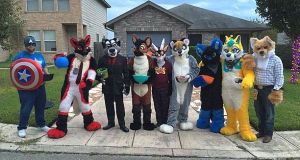 I’m the guy taking the picture

Halloween has been a non-holiday for me ever since I took my last trick-or-treating sojourn as a kid many years ago. I didn’t have many friends in my teen and college years to be invited to parties or to engage in trickery.  Upon moving out, I discovered that exactly zero kids come seeking treats at your door when you live in an apartment.  Except for handing out candy at my parent’s house a few random times, the only thing Halloween meant to me was that Mary Jane peanut butter kisses were available.  Hey, at least it’s not candy corn.

When I purchased a house a few years ago, I figured that I was going to spend my future Halloween nights handing out candy to excited trick-or-treaters.  As fate would have it, that never happened.

At least, it never happened at my house.

You see, I had joined the furry community a year before buying the house and as a result, made some new friends.  One friend that lived nearby also owned a home, and he had spent the previous Halloween handing out candy while wearing his fursuit.  (“Fursuit” is the term for the animal costumes that some furries wear)  When the next Halloween rolled around, he invited a few friends and myself to come over and hand out candy.

I don’t own a fursuit myself.  They can run in the few thousands of dollars so I like to joke that I have a mortgage and a car payment instead.  My lack of costume made me the ‘handler,’ a person that helps out fursuiters by making sure they don’t trip over things or bump into kids.  Since fursuit heads severely limit vision, a handler’s job is essentially to keep fursuiters from accidentally hurting themselves or others.  In addition, my job was to take pictures and occasionally run into the house for more candy and bottled water to keep our three fursuiters hydrated.

The fursuits were a smash!  After the trick-or-treaters got candy from each one of them, their parents often wanted to take pictures of their costumed children (and sometimes themselves) with the fuzzy people.  It wasn’t unusual to have a large group of people congregated in front of the house: Trick-or-treaters collecting candy, parents taking pictures, fursuiters being silly and everybody having a great time together.  We stayed outside until our supply of candy was gone.  Despite being pretty bushed from all the running around I had done that evening, it was easily the most fun Halloween night I’d had in years. 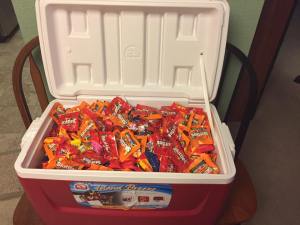 We gave it all away, too!

The tradition continued with seven fursuiters showing up the next year and more and more joining the fun with each successive Halloween.  Lucky for me, more handlers showed up, too!  One guy even bought an ice chest that we filled up with candy before getting to work.  There were a grand total of fourteen fursuiters last year, making the house a veritable bonanza for the trick-or-treaters in terms of the amount of candy and fun to be had.

I have yet to spend a single Halloween night at my own house.  Instead, I have furries to wrangle, candy bowls to refill, pictures to take, and memories to make!