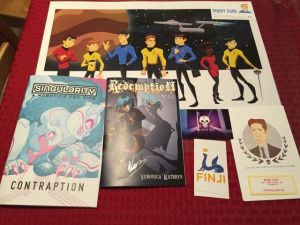 Instead of my usual ‘things I noticed’ list, I’m going to take a different approach with this post-convention blog post. At every convention, I see lots of neat artwork from independent artists. Sometimes there are independent game studios showing their wares, and they will often have some pretty cool demos to check out.

This past weekend I attended HavenCon in Austin, Texas. HavenCon bills itself as “the first geek and gaming convention in Texas to focus on the LGBTQIA and Ally communities,” and indeed there was a variety of things to see and do.

So without any further ado:

I purchased some nice X Files-themed prints from Megan Kluck featuring artwork similar to this.  Her art can be found at tasteslikekeys.tumblr.com

This print from Robby Cook will be hanging in my home soon.  His wonderful artwork and mash-ups can be found at robbycook.com

I bought a zine from Bis Thornton (bisthebox.com) and E. S. Mahoney named “Singularity: Contraption” that contained some neat stories about robotics.

“Redemption,” a comic written and drawn by Veronica Kathryn, is the story of a girl who’s trying to make up for the fact that she ENDED THE WORLD.  Oops.  It can be read at redemption.smackjeeves.com and her artwork can be found at bobo-kitty.deviantart.com

There were a few indie game developers there with some neat games, such as Black Ice, a funky Tron-inspired first person shooter with RPG elements by Garrett Cooper.  Finji knocked my socks off with a turn-based survival game called Overland, which is currently in development.

I had an enjoyable weekend at HavenCon, made even more so by these folks and their wonderful work!  I hope you check them out, and thanks for reading!

One thought on “Some Neat Stuff I Saw at HavenCon 2016”