NOTE: This is a transcript of a podcast for those with hearing difficulties, those that prefer to read, and those who rather prefer to not hear the sound of my voice. 😉

Click here to listen to this episode on Podomatic.com!

You are listening to ‘300 Seconds with Eduardo Soliz,’ and this is episode number one hundred and four: “My Coronavirus Story: The Fiesta’s Over,” so let the 30 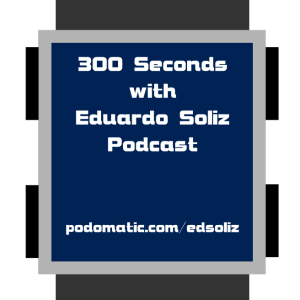 For me, the whole coronavirus business started with an e-mail that dropped into my inbox one afternoon in mid-March, which now seems so long ago.  My job at the time was being the computer tech at a local night school.  The campus was small and the people there were nice, so it was a pretty cushy gig.  Except for the weirdo night school schedule and having to work the occasional Saturday, it would have been the perfect job, but that’s a conversation for another time.

I was aware of the coronavirus situation, though not a whole lot had changed for me personally; the security guard would spend time each day sanitizing door latches with Lysol and I had started sanitizing the keyboards and mice that were in the classrooms.  The week before, there had been a bit of a stir when one of the folks in quarantine at Lackland Air Force Base had gone to a local mall before testing positive for the virus, resulting in the mall shutting down for deep cleaning.  I remember Mayor Nirenberg having lunch at that mall after the reopening to reassure the public that all was well; I had actually gone to the same mall for lunch that day and joked to my friends about missing him.  While at the mall, I asked the gal at the register if things had slowed own and she gave a resounding yes with no hesitation whatsoever.

Otherwise, Thursday, March the 12th of 2020 was just another day at the office for me keeping computers, projectors, servers, staff, and professors up and running.  Sometime after lunch, the e-mail that would change everything arrived.  That night’s classes would be the final one of the session because all campuses were closing down.  From here on out, classes would be online only and everyone would be working from home.  That meant that folks had to gather up laptops, docks, monitors, keyboards, mice and pretty much anything else they might need to work from home.  The email mentioned that the closure would be through the end of the month, though I quickly heard rumors that the closure would last though the end of April.

My day became much more interesting after that. All I had to do to prepare for working from home was pack my work laptop and the professors were already accustomed to working from home.  That left campus staff who came to me asking for extra cables, headsets, mice, monitors and even a few docking stations.  After I took care of them, I began packing up the personal items that I had in my office.  That took some time, because as office workers are oft to do, I had accumulated quite a few things.  My Spidey-sense told me that I would not be coming back for a while, so I packed everything up.  Of course, at the time, nobody had any idea of how bad things were going to get.

The next day, March the thirteenth, was a sad and crazy day in San Antonio both at the same time.  Speculation had been circulating that Fiesta, the Alamo City’s 17-day long celebration of Texas independence, would be cancelled, and on that day, it was.  I honestly believe that the majority of folks in San Antonio did not take the coronavirus seriously until Fiesta was cancelled.  I say this because I decided to take a trip to HEB during my lunch break for a few things and it was INSANE.  The closest parking spot was in front of the store next door, and upon stepping inside, I was greeted by a mob of people with full shopping carts lined up all the way to the back of the store.  I quickly left upon seeing this and went to another store that wasn’t quite as packed.

I spent that workday logged into my work laptop monitoring queues and chats, waiting for something to happen.  It didn’t.

Ready or not, The New Normal was here to stay; it was just a matter of how long it was going to last.  It would turn to be longer than I had hoped and also shorter than I had expected.  You’ll see what I mean in the next episode.

This has been 300 Seconds with Eduardo Soliz, the next episode will be posted after I double-check on my stock of toilet paper.  Subscribe via your favorite app, and visit Eduardo Soliz dot com for more words written by me!  I am Eduardo Soliz and I thank you for listening!