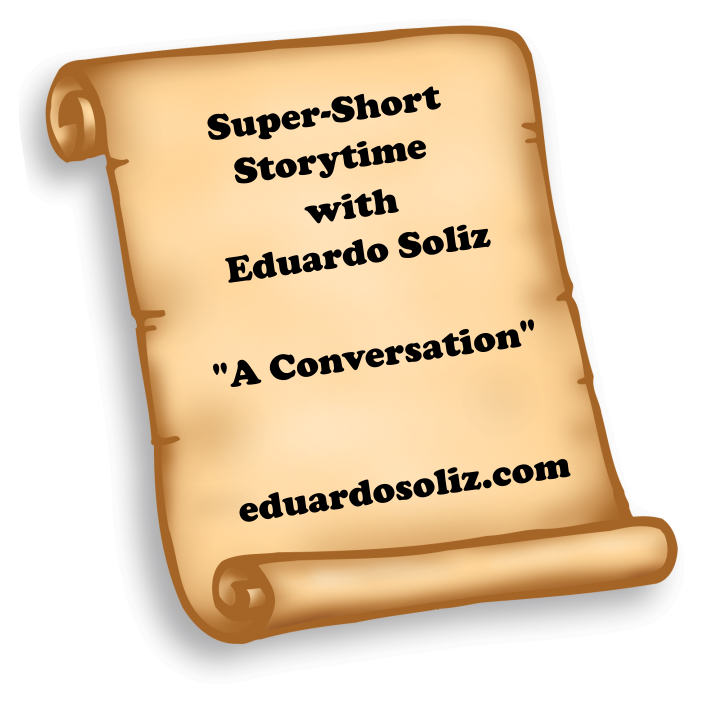 Whether you work with words, musical notes, paint, foam, cloth, or even pixels, there are few times more frustrating than when your brain just doesn’t want to cooperate and the whatever-it-is that you want to create just doesn’t happen.  We’ve all been there, and one such time provided me with this delightful drabble that I have deemed: “A Conversation” 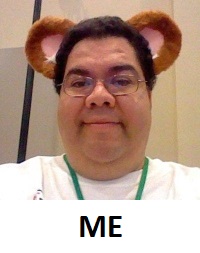 I can be pretty moody at work, depending on how much stupid is being thrown at me from all directions.  I would say that my average mood has gone from anger to indifference as of late as I slog through each day’s 8-hour adventure.

There are brief moments of happiness to be found, though, whether its from coworkers’ jokes, a good lunch, or even the occasional not-completely-angry-at-us customer.  I was having something of a ‘blah’ day earlier this week when I stopped to have a conversation with one of my cubicle-neighbors.  The conversation awoke my muse and I spent my lunch hour starting on writing a short story that was inspired by that conversation.

The story isn’t anything terribly special; it’s supposed to be a quick gag story that I’ll post onto my website.  But I enjoyed writing the beginning of that story, so much so that I returned to the office a few minutes late.  I spent the remainder of that afternoon in the office in a really good mood.  I was happy not only because of the work I had done, but also at the anticipation of finishing that story.  Thoughts of dialogue and plot points popped into my head on occasion.

I don’t know if it was because I hadn’t written anything in awhile, but that one hour or so of writing made me feel wonderful, even if it I wasn’t something terribly important.  There’s just something about creating something new that is very satisfying, second only to the euphoria of finishing it!

Or at least, watch less.

“If you don’t have enough time, stop watching TV,” the saying goes.  The phrase comes from the Holstee Manifesto, which in itself is a pretty good read.  I don’t quite agree with it completely, but that’s a discussion for another time.  At first, I thought: ‘Well, that phrase could also apply to video games these days.’  I got wound up and prepared to write a blog post about how people need to turn off their consoles, unsubscribe from whatever MMORPG they had become addicted to, get off their duffs, and start doing something.

The more I thought about it, the more heavy-handed I knew it was going to be.  Before I could start writing, though, I thought about the phrase just a little more, particularly in relation to my own creative life.

I had cut back on watching television several years ago; it was one of the consequences of having worked the phones at a cable company listening to TV addicts wail and gnash their teeth for 40 hours a week.  My television watching had been reduced to news, weather and sports.

A few years after that, I joined a couple of other San Antonio folks in starting what came to be known as First Storm Manga.  I also started writing fiction; I had long wanted to write a book about my experiences in technical support, but had never attempted to write fiction before.  I liked it, and eventually decided to try my hand at self-publishing my stories in ebook format.

Unfortunately, I also ended up taking on various ‘side projects.’  I joined a band, became editor of a video game website, and First Storm began to take up more of my time.  At the same time, I was trying to keep up a blog, podcast, and work on my writing. I eventually found myself spending more time on other people’s projects  and less time pursuing my own.

A few months ago, I decided to cut back on those “side projects.”  I had already left First Storm, so I quit the band, left a group that was putting an event together, and reduced my role at the game website.  My focus would be on my own writing, and that would be it.

I will be stepping down as editor of Original-Gamer.com at the end of November, and I wish OG and the crew nothing but success as I pursue my goal of being a writer full-time.

Back to the saying.  I thought it over, and felt it would be a bit hypocritical of me to say ‘stop playing videogames’ when I still play them myself.  I also still watch television, just not as much.  Then it came to me:

It isn’t a matter of “stop watching TV” or “stop playing video games.”

It’s a matter of “Stop letting other things get in the way of your dreams.”

Now get off your duff! 🙂

I have been working on my second e-book, titled “The Rules of Tech Support,” for what seems to have been way too long.  Now, it isn’t a very long work, and I have already written some of it on my old LiveJournal and on my podcast. For the longest time, though, it sat at about 80% completed.  I just couldn’t get any farther; I would sit behind my laptop, fire up Microsoft Word, tap Ctrl-End to get to the end of the document, and…nothing.  For months, absolutely no progress.

The project eventually got back on track.  It was either because I started working in tech support again, or because I found myself writing in different places.  As odd as it sounds, I am convinced that writing in different places or in different ways helps the creative process along.  In my case, I found myself taking notes in between calls during work, and even stayed in late at the office one day, spending a whole hour alone just typing away.  Somehow being at the office made me think different.  Heck, I think that using my tablet instead of my laptop helped.

What I’m trying to say is that you cannot ‘think different’ if you are doing the same thing over and over again.  To change my thought processes, I had to change where I was doing my thinking.  If nothing else, its a good excuse to hang out at a coffee shop or diner for a few hours.

The most direct effect of reviewing games is that it has turned playing games into work (albeit volunteer work).  Its a mental thing: instead of playing games because I want to, I now play them because I have to.  It gets a little annoying at times when I have a stack of games I need to plow through or when I get asked to play games in genres I don’t particularly enjoy such as fighting or driving.  The most aggravating bit about the whole thing that it takes time away from games that I want to play, but you gotta do what you gotta do.

The first thing I do when I get assigned a new game to review is I write the review’s introduction.  I like to have it done before I even start playing, and in my opinion it should give the reader some context in regards to my relation to the game.  Is it something I have been looking forward to, or something I’ve never heard of?

When I play a game for review, I keep my laptop handy so that I can take notes while I’m playing it.  That way after I’m done playing the game I just have to flesh out the bullet points I have marked down.  I’m not sure if I should be admitting this, but I don’t always finish games I review.  Usually its because I don’t expect to see anything new after having played a game for so many hours.  Let’s be honest, after a certain point, few games really offer anything surprising in terms of gameplay.

One game that bit that strategy in the pants was Gladiator Begins. I played through about 30 days of the campaign, probably about seventy or eighty nearly-identical fights, figured there was nothing else in the game, and wrote my review.  I went back to the game and soon discovered that the levels did start to occasionally change up, and upon seeing the box in a store, I learned that there were even fights against animals.  D’oh.  It was either my fault for giving up on the game too early or the devs fault for taking too long to open up the game’s interesting parts. Probably a little bit of both, oh well.

Writing reviews is a balancing act.  On the one hand, I don’t want to look like a fanboy by gushing praise all over a good game, nor do I want to simply verbally vomit all over a bad one for the sake of being entertaining.  Great games have minor flaws that have to be explored, and bad games sometimes have good ideas that were not executed well.

Picking out a numerical score can also be a bit of a headache, because I want my score to reflect what I have written.  I still read reviews myself, and I get annoyed just like everyone else when the two don’t jive.  I go by what the site says on the “About” page, supposedly we work on the ‘bell curve’ model where the middle point is average.  Despite the occasional “10” handed out, nobody’s really perfect.

At the end of the day, though, the site editor is the guy that says what goes up on the site, and while I haven’t always agreed with Oscar, I think he’s doing a good job for the most part.  Working with him and the rest of the original-gamer.com crew has been lots of fun.

And now, back to EyePet…whee

I have never been able to draw very well, but any graphics I need (for say, a website!) I have to make myself. Fortunately, by using a vector-based drawing program (put simply, drawing with lines instead of dots) I can somewhat get around my lack of artistic talent.  I suppose an artist who works in the real world (as opposed to the digital one) would consider it cheating, but hey, I need to cheat.

Anything I make always ends up all straight lines and SOLID PRIMARY COLORS, anyway, like the logo I made for this website (see upper-left corner). I suppose it is a side-effect of spending all that time on the computer.  Ah well, I’m better with words anyway.